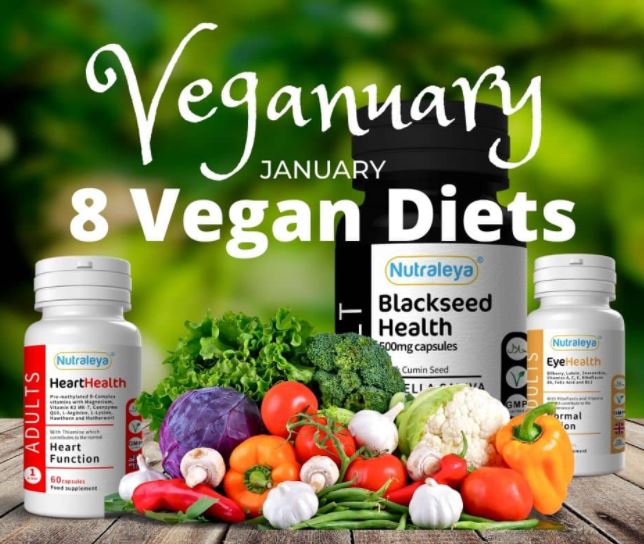 London, UK, 31 Jan 2022, ZEXPRWIRE, Written by Amir Jamil. Is Veganuary the New January? And What’s the Eight Vegan Diets?   Firstly, reflecting on the start of this month everyone you know, friends, family, colleagues, the check-out till person were wishing each other a happy new year. It’s a time for a fresh start, resetting health and fitness plans, turning over a new leaf, setting new goals etc. While #Veganuary is becoming commonly known as the new January I have found out that there are eight different types of vegan diets. The last couple of years with the COVID pandemic has given many of us the time to reflect on our lifestyle and diet and assess our priorities.

Getting healthy and staying healthy is at the forefront of our minds and the beginning of a new year is a good place to start.  Besides making new year’s resolutions, January also marks a month of veganism, and those taking the 31-day challenge to go vegan have renamed it #Veganuary. Of course, not everyone is ready or willing to take up the challenge. I spoke to nutritional therapist Aleya Chowdhury CEO of Nutraleya who has been producing insightful midweek nutrition tips every Wednesdays about everyday super vegetables on their social media channels #nutraleya to bring greater awareness of nutrients and health benefits that exist in super vegetables in support of healthy balanced diets. Veganuary has gained popularity over the last few years several celebrities such as Benedict Cumberbatch, Zac Efron, Ariana Grande, Joaquin Phoenix, and Miley Cyrus are just a few who have embraced veganism and have raved about its lifestyle benefits.

What is Veganism?   Veganism is currently defined as a way of living that attempts to exclude all forms of animal exploitation and cruelty, be it from food, clothing, or any other purpose. There are four main categories of vegans. These are:

Ethical vegans – Ethical vegans strongly believe that all creatures have the right to life and freedom and are strongly opposed animal cruelty. They are against the killing of a living being simply to eat its flesh, drink its milk, or wear its skin, especially since alternatives are available. They are also opposed to the psychological and physical stress that animals may endure as a result of modern farming practices. For example, ethical vegans deplore the use of small pens and cages in which the animals are kept and rarely leave between birth and slaughter. Ethical vegans often demonstrate their opposition by protesting and raising awareness of farming practices and its treatment of animals. They speak out against the practice of grinding male chicks by the egg industry and the force feeding of ducks and geese for the production of foie gras.

Environmental vegans – People who want to lead a greener lifestyle to reduce their negative impact on the planet often turn to veganism.

Health vegans -Many people have opted to follow a vegan diet as a lifestyle choice for its potential health benefits. Many studies have shown that a plant-based diet may reduce the risk of developing heart disease, Type 2 diabetes, and cancer. Intensive animal farming involves the use of hormones and antibiotics. Many people follow a vegan diet to avoid the damaging side effects linked to these chemicals. On average, people who are vegan tend to have a healthier BMI (Body Mass Index) and a vegan diet is often used in weight loss programmes.

Religious vegans – These are people who choose to follow a vegan diet due to their spiritual and religious beliefs. Veganism is considered to be a strict form of vegetarianism and some Hindus, Buddhists and Jains have gone a step further than the common practice of being vegetarian and have chosen veganism. Ahimsa is a practice of non-violence in these three religions. It is based on the belief that all living beings, including animals, have a spark of divine energy inside of them. Those who follow Jainism in its strictest sense also avoid consuming onions, garlic, and potatoes as well as other plants that grow underground. As well as these four main types of vegans, there are eight different vegan diets:

What can vegans eat? As a vegan diet has many restrictions, it’s important to know which foods can be consumed and alternatives to those that are excluded from the diet. Vegans can eat any plant-based food. They cannot eat meat, chicken, fish, shellfish, eggs, dairy, and honey. Vegans also avoid animal-derived ingredients such as albumin, casein, carmine, gelatine, pepsin, and whey.  Meat alternatives include beans, lentils, tofu, seitan (from wheat), tempeh (from soya beans), nuts, and seed. Milk can be replaced with plant-based milk such as almonds, soya, coconut, and oat. Scrambled eggs substituted with scrambled tofu. Honey with plant-based sweeteners such as molasses, maple syrup, and stevia. The vegan market is growing and there are many products available including vegan ice cream, chocolate, vegan meat, desserts, and cheese.

What nutritional therapist Aleya Chowdhury said about the vegan diet?  “The biggest concern with a vegan diet is that it may not provide all the essential nutrients for adults, particularly for growing children. Parents, therefore, need to be very aware and informed as there is a risk of deficiencies such as vitamin D, Vitamin B12, calcium, iron, and omega-3 fatty acids. Vegan diets also tend to be less energy-dense, so children would need to eat larger quantities of food to meet their energy requirements. This could be a problem as young children are often fussy eaters and have smaller appetites. A simple solution would be to  add oils such as soya bean or cold-pressed rapeseed as they add more calories to the meal or add HealthyKid 4+ Multivitamin and Minerals that include vitamin d, iron, and calcium to help safeguard their diet for healthy growth and development.

Trying out new challenges may help make 2022 a healthier and happier one going forward. If you are taking the Veganuary challenge, you may be surprised how easy it is to incorporate it as part of your healthy balanced diet, and with so many exciting new vegan products on the market, becoming vegan/vegetarian friendly can be easily adapted. If you decide to take the Veganuary challenge further and are worried about getting all the nutrients that you and your family need, you may want to think about using a multivitamin supplement.