Europa, Jupiter’s fourth-biggest moon has always been a source of fascination for both scientists and non-scientists alike, so much so that in 2013 director Sebastián Cordero made a movie around it. Dubbed Europa Report, the fictional plot showed an international crew of astronauts undertaking a privately funded mission to search for life on its surface. Science seems to be catching up to the fiction now, as the Hubble space telescope has picked up the presence of persistent water vapour on this moon.

However, mysteriously these water vapours are only in one hemisphere.

The latest observations by the flying observatory advance the understanding of the atmospheric structure of icy moons, which is said to likely have conditions hospitable for life. Scientists have said that Europa harbours a vast ocean underneath its icy surface and are studying its atmosphere to explore whether an environment over two billion kilometres from the Sun could support life.

Europa is said to have a surface mostly made up of water ice and scientists have found evidence that beneath the ice crust is an ocean of liquid water or slushy ice. It was in 1979 when two Voyager spacecraft passing through the Jovian system provided the first hints that Europa might contain liquid water. 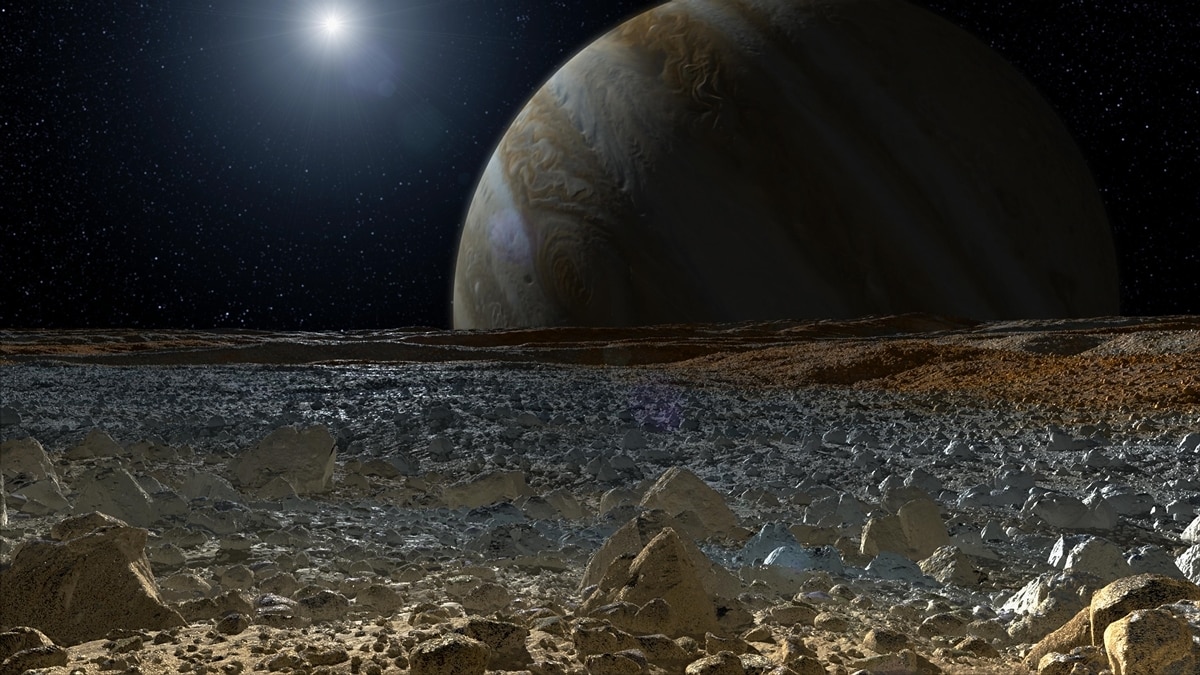 Scientists think Europa’s ice shell is 15 to 25 kilometres thick, floating on an ocean 60 to 150 kilometres deep. Evidence suggests that while the Moon is just one-fourth the size of Earth, it may contain more water than all the oceans of our planet. Previous observations of water vapour on Europa have been associated with plumes erupting through the ice, as photographed by Hubble in 2013.

“Europa’s vast and unfathomably deep ocean is widely considered the most promising place to look for life beyond Earth. A passing spacecraft might even be able to sample Europa’s ocean without landing on the moon’s surface because it is possible that Europa’s ocean may be leaking out into space,” Nasa has said.

A WATER-RICH SYSTEM BILLION KM AWAY FROM SUN

The new observations that include data spanning from 1999 to 2015 show water vapour spread over a larger area of Europa, suggesting a long-term presence of a water vapour atmosphere only in Europa’s trailing hemisphere that portion of the moon that is always opposite its direction of motion along its orbit.

This is not the first time that water vapour has been seen present in the moons of Jupiter. In July this year, Hubble had observed water vapour on Ganymede when it was looking at auroras on the Moon. Nasa said that the auroras are used to trace the presence of oxygen, which then is linked to the presence of water molecules sputtering off the surface.

Similar to Europa, Ganymede too has a deep ocean located an estimated 160 kilometres below the surface.

“The observation of water vapour on Ganymede, and on the trailing side of Europa, advances our understanding of the atmospheres of icy moons. However, the detection of a stable water abundance on Europa is a bit more surprising than on Ganymede because Europa’s surface temperatures are lower than Ganymede’s,” Lorenz Roth of the KTH Royal Institute of Technology told Nasa.

Located over two billion kilometres away from the sun, the latest observations show that solar radiation is triggering events on the moon. With a daytime frigid of over -150 degrees Celcius new observations suggest water ice is sublimating – transforming directly from solid to vapour, without going into the liquid phase.

This detection paves way for in-depth studies of Europa by future probes including NASA’s Europa Clipper and the Jupiter Icy Moons Explorer mission from the European Space Agency (ESA). Nasa’s Europa Clipper mission will be launched by SpaceX in October 2024 on a Falcon Heavy rocket. The probe will determine if this distant moon has conditions favourable for life.

Europa was first discovered by Galileo in 1610, who also found three other moons, Ganymede, Callisto and Io, around Jupiter. The first telescopic observation of this world was made in the 1950s that suggested an abundance of water ice on the surface.