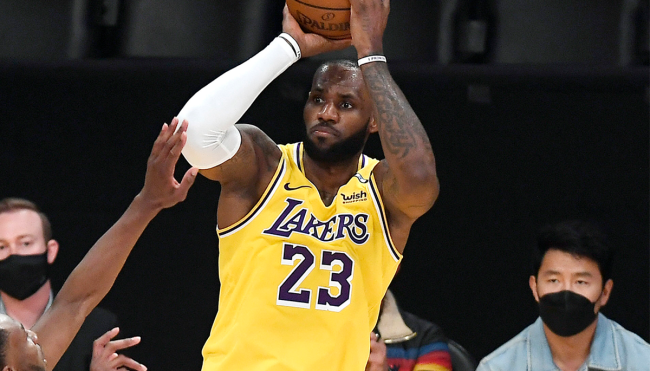 There is certainly no shortage of valid reasons to hate on LeBron James, including—but certainly not limited to—his incessant flopping on the court, his penchant for whining off of it, and (based on the House Party remake we recently learned is in the works) his seeming insistence on desecrating the memory of beloved movies from the 1990s.

Now, you’d think LeBron’s role in ruining the childhood of anyone who subjected themselves to Space Jam: A New Legacy would be the most egregious thing he’s done this year. However, as Molly Knight revealed in an article that was published over the weekend, he might’ve outdone himself back in May when he played an instrumental role in eliminating the Golden State Warriors from the playoffs—and eliminating the health insurance coverage of dozens of employees at the arena where they play.

Before I continue, I would like to stress I’m currently employing a literary device known as “sarcasm,” as it would be insane to actually suggest James was responsible for the situation Knight recently examined; this is more of an indictment of America’s health care system than anything else. Based on more than a decade of precedent, that’s still not going to stop people from sending me angry tweets and emails, but that’s also not going to stop me from trying.

On May 19, 2021, the Lakers and the Warriors faced off in a play-in game that took place at Chase Arena in San Francisco. With a little less than a minute remaining in the fourth quarter, James drilled a deep three that would turn out to be the deciding factor in the 103-100 victory that saw Los Angeles punch their ticket to the playoffs.

The loss meant the Warriors had to face off against the Grizzlies in a do-or-die qualifier at home. However, the stakes were arguably higher for the employees in charge of concessions at the game, as a contract clause that requires them to work 10 games each month in order to qualify for health care coverage meant they needed Golden State to secure a spot in the playoffs to keep their insurance.

The Warriors would ultimately lose to Memphis in overtime and the employees (who were subcontracted from a company called Bon Appetite) subsequently lost their coverage. Nnow, the union that represents them (in addition to concessions workers at nearby Oracle Park) is pushing to change the policy, with a rep saying:

It’s absolutely ridiculous to take away workers’ health care in a pandemic over something that’s no fault of their own. That’s one of the reasons we have chosen to fight.”

The union and the company are currently engaged in negotiations after almost 97% of members currently staffing San Francisco Giants games voted to go on strike earlier this month, and based on how you look at things, you could argue LeBron’s truly heartless nature could actually be a blessing in disguise in the long run.

Best possible Hair Care Regimen: What To Do And What Now not To Do