Award-winning writer John Lewis-Stempel’s soul is moved both by the art and the science of the snowflake.

Snowflakes are formed by what meteorologists call the Bergeron Process, named for 20th-century Swedish weatherman Tor Bergeron. Cloud with a temperature between 0˚ and -20˚C or below contains super-cooled water, ice crystals and water in a gas state. When the super-cooled water encounters a microscopic ice crystal (sometimes fixed around a high-flying pollen, ash, bacterial or dust particle), nearby water vapour freezes directly onto the crystal without becoming liquid.

Upon attaining sufficient weight, gravity causes the ice crystal to fall — and a snowflake is born. This embryonic snowflake is hexagonal, due to the efficient, pre-ordained order that water molecules (each with one oxygen and two hydrogen atoms) assume during crystallisation.

If conditions are wrong, the snowflake will melt and plop down as rain or frozen raindrops (sleet). Otherwise, as the temperature cools, more water vapour freezes on the six sides of the seed flake, which may themselves sprout ‘branches’ — these accumulate yet more water molecules. As the flake drifts, at between 1mph and 9mph, through the sky, it experiences further accretion, but also random collisions, plus changes in temperature and humidity.

The snowflake is symmetrical because all sides of the flake experience the same journey. However, each journey to earth, which may take an hour or more, is unique.

Thus the old cliche ‘that no two snowflakes are alike’ is true — at least in the case of complex snowflakes, the iconic six-sided fluttery, floaty puffs of Bing Crosby songs, ski sweaters and Christmas cards, which were famously first caught on camera by the Vermont farmer and photographer Wilson ‘Snowflake’ Bentley in 1885.

Although the science of snowflakes began with Germany’s Johannes Kepler, who, in 1611, penned a small treatise entitled The Six-Cornered Snowflake, seeking to explain the flower-like shapes of snow crystals, the breakthrough work came with the 1930s laboratory experiments of Japanese physicist Ukichiro Nakaya of Hokkaido University.

Nakaya developed techniques for growing isolated snow crystals — or stage-one snowflakes — in test chambers and proved that a snow crystal’s morphology was mainly a function of the temperature and humidity of the air. Just below freezing, at about -2˚C, thin platelike crystals appeared. Under slightly colder conditions, about -5˚C, slender needles were the preferred shape. At -15˚C, the largest and thinnest plate-like crystals formed and below -25˚C the crystals grew mainly as short columns. 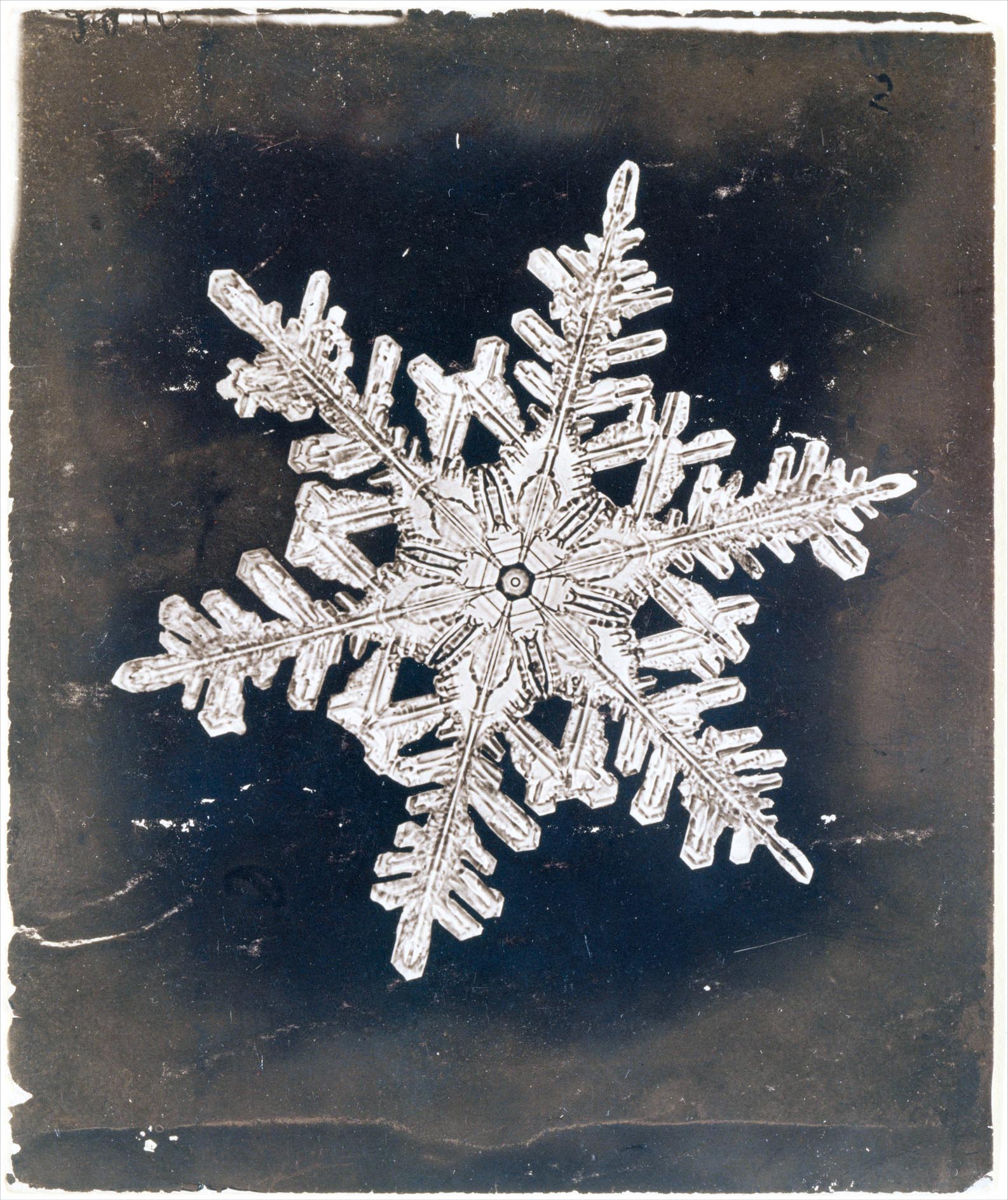 Photographs by Wilson Alwyn Bentley (American, 1865-1931), a self-educated farmer from Jericho, Vermont, and a pioneer in the field of photomicrography. Using a microscope fitted to a bellows camera, he was the first to photograph a single snowflake. For over half a century, he pursued his obsession with the unique forms of snow crystals, cataloguing the endless variations on a basic hexagonal structure. (Photo by: Sepia Times/Universal Images Group via Getty Images)

Nakaya liked to say that snowflakes are like hieroglyphs from the sky, because you can infer the conditions in the clouds by examining the shapes of the falling snow crystals. His summarised Snow Crystal Morphology Diagram, or Nakaya Diagram, remains the standard guide to snowflake science.

If you seek beautiful stellar snowflakes outside, remember this diagram. The perfect, slow-falling, six-sider flake requires about -15˚C, low cloud, no wind and high humidity. If snowflakes come in all shapes, they also come in all sizes, from a free-falling single crystal to something the size of a dinner plate, this latter the consequence of thousands of crystals colliding and colluding.

According to Guinness World Records, the largest-ever flake was 15in wide and was recorded by a Montana rancher in 1887. Whatever their dimension or shape, snowflakes are transparent; ice crystals cause diffuse reflection of the whole light spectrum. The ‘whiteness’ of snowflakes is an illusion.

So much for the science, then. What of the art of the snowflake? Where better to start than with a classic poem:

Before I melt,
Come, look at me!
This lovely icy filigree!
Of a great forest
In one night
I make a wilderness
Of white:
By skyey cold
Of crystals made,
All softly, on
Your finger laid,
I pause, that you
My beauty see:
Breathe; and I vanish
Instantly.
— ‘The Snowflake’ by Walter de la Mare

Snowflake. The word is too clumsy for the white ice petals that tumble down the sky on wintry days. In righteous artistic protest, the American poet Emily Dickinson broke the noun delicately in two, to ‘snow flake’.

Snowflake. Petals. Blossom. When snowflakes fall, the writers and the artists, the poets and the graphic designers try for the bon mot or the exact dab of Old Holland paint to stick snowflake to page, canvas and Christmas card. Our homegrown versifier John Clare plucked at ‘feathers’, which is childishly clever; ‘God’s pillow fight’ is a venerable playground explanation for snowing. Even a casual encounter with descending snow when an adult causes us to recall our first snowball fight, our first sledge ride, our first carrot-nosed snowman. When snow falls we wonder, as we did in infancy’s Noël nights.

Standing in swirling snowflakes, the decidedly mature Henry David Thoreau declaimed: ‘How full of the creative genius is the air in which these are generated! I should hardly admire more if real stars fell and lodged on my coat.’ The awestruck author of Walden was onto something with ‘creative genius’ and ‘stars’. When snowflakes fall, who does not face up to the heavens and have high thoughts? Thoughts of a maker.

There appears a design magic, a divine architecture in snowflakes, each one possessing an individual symmetrical hexagon. A brilliant geometry. Star-like indeed. When snowflakes fall, even scientists are moved to imagination. The Japanese physicist Ukichiro Nakaya, the don of snow science (see box), termed snowflakes ‘hieroglyphs from the sky’. You may think of Japan as ‘the land of rising sun’, but the Japanese would equally consider themselves defined by exquisite, snow-dotted images of Mount Fuji and Tokyo by the Ukiyoe artists Hokusai and Hiroshige. 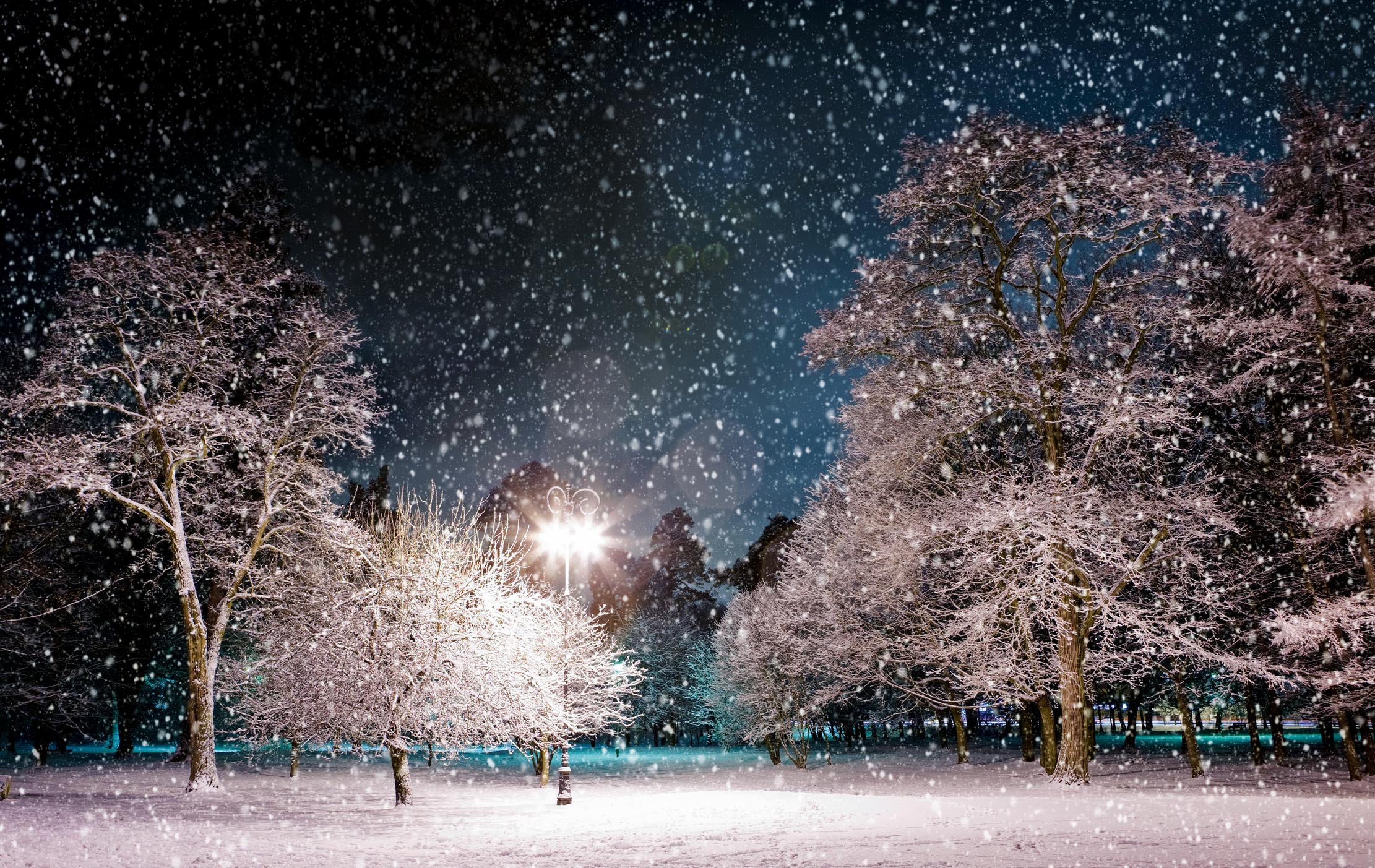 Well, we all have our snowflake culture; on January 19, 1977, it snowed in the Bahamas. If the Inuits famously have 50 descriptors for snow, the Scots outrank them with 421, beginning with the so-so ‘spitters’ (small flakes) and ‘snaw-pouther’ (powdery snow), but ending with the visual onomatopoeia of ‘skelfs’ (large flakes). When snowflakes fall, no other element of winter weather compares or begets such a lexicon. Wind is invisible, rain is everyday stuff and drizzle is drizzle. Yet snowflakes may pirouette and leap, defying gravity — hence the poetiser’s ‘water with wings’, but better Dickinson’s ‘I counted till they danced so/Their slippers leaped the town’. The ballet of the snowflakes.

When snowflakes fall, their overlooked aesthetic is sound; Lewis Carroll considered that snow ‘kisses’ the ground before motherly laying its quiet quilt. Robert Frost, in his most famous poem, Stopping by Woods on a Snowy Evening, hears his horse shake its harness and ‘The only other sound’s the sweep/Of easy wind and downy flake’.

We have all heard the kissing/hissing of snow on freezing nights as we stumble to the front door. And those who work outside know the ‘tick’ of snowflakes on long drops through bare trees in the winter wood. These are old sounds, echoes of the Ice Ages, when all was blizzard. Of course, the truest sound of falling snowflakes is the sound of silence, as in Longfellow’s shushy alliterative, ‘Silent, and soft, and slow/Descends the snow’. The lullaby of the snowflakes.

Snowflakes, they muffle and they mute. The fallen snowflake settles a medieval quiet on the land. Turns present into past. A bent-over trudge with the dachshund through the park’s white inches becomes Pieter Bruegel the Elder’s 16th-century painting Hunters in the Snow. Or the power of Nature, the powerlessness of humans.

The aesthetics of falling snow are as infinite as the pattern of snowflakes themselves. They have beautiful, brief lives. Ice butterflies. When we try to grasp them, they melt on the palms of our hands — they are physically, as well as artistically, difficult to capture. 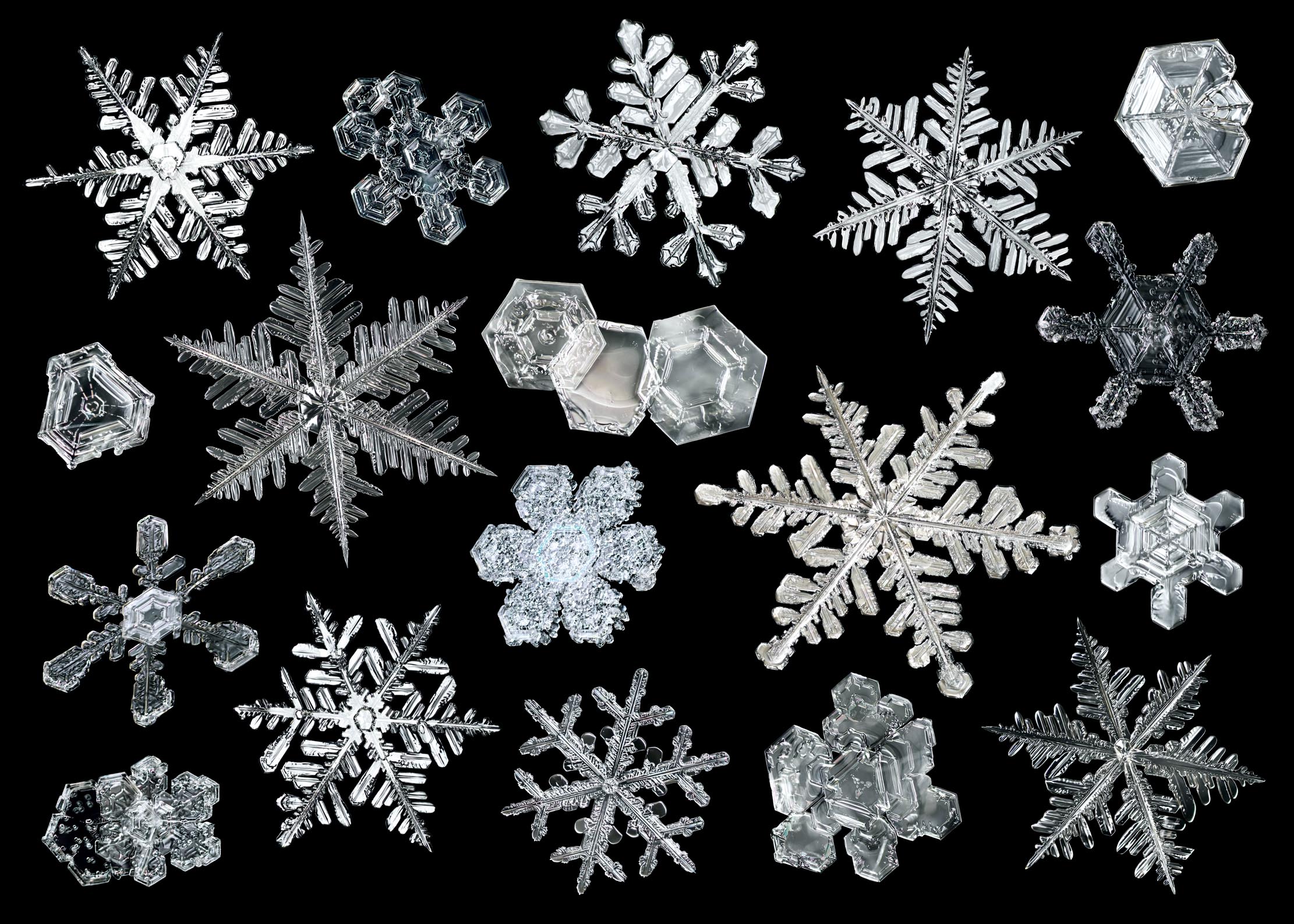 However, if snowflakes are transient, they are also transformative. The ugliest of urban environments is prettified by the mass of fallen snowflakes. Snow is democratic, seamlessly levelling the potholes in Hackney with the hoof marks of the squire’s horse out hacking, caking roof of cottage and county hall alike.

Snow is the great white hope, the promise of a new beginning. A blank canvas. The Suffolk artist George Graham pointedly, with pointillism, depicted a snowstorm as The Creation. When snowflakes fall, a paradox is created. One flurrying flake makes you remember the world is old, one flake makes you born again. A few gently floating flakes put you inside your own personal snow globe; a savage whirl of flakes — a blizzard — produces a frisson, as, in de la Mare’s words, these ‘make a wilderness/Of white’.

Sometimes, when snowflakes fall, car windscreen wipers groan, sheep hug the hedge and the small animals will not venture from their burrow for fear of marking the white sheet with tail-tell tracks. The paw marks of the padding fox fill with white powder and each exposed human is a polar explorer, the first person, the last person navigating a featureless white planet. Thrilling wilderness or enchanted wonderland, we hardly care. We still rush to the window when snowflakes fall.

Christmas and snow have gone together for so long that we’ve almost forgotten why.
Credit: Alamy

Snow at Christmas is a rare sight across most of Britain, yet it’s indelibly intertwined in the collective imagination. Felicity

The national obsession with weather kicked into overdrive on Thursday as people across the nation were gripped by Thundersnow fever.

Martin Fone examines the science behind snow and explores the history of snowfalls in the UK.

The hexagon abounds in the natural world. John Wright investigates why.